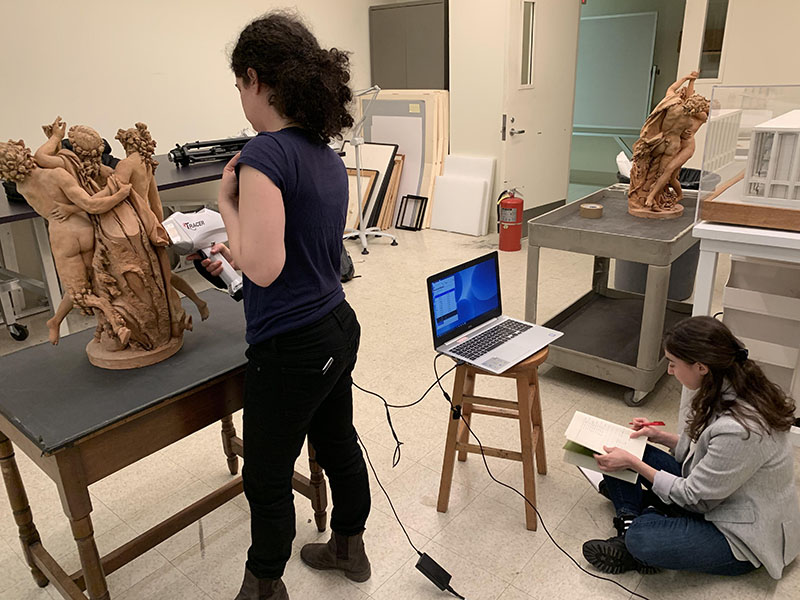 Mika Tal, Preservation Technology Laboratory Manager at the Graduate School of Architecture, Planning and Preservation, and Majdolene Dajani, candidate in the MA in Art History, testing Satyr and Two Nymphs with an XRF tracer to determine its chemical composition, April 5, 2019.

Clodion (1738-1814) and “Clodion Mania” in Nineteenth-Century France is curated by Marie Bouichou, Majdolene Dajani, On Tsun Fung, Sarah Jane Kim, Margaret Masselli, Hugo Scheithauer, Sydney Sheehan, Yusang Shi, Lowell Sopcisak, and Nicole Sussmane, candidates in the MA in Art History in the Department of Art History and Archaeology at Columbia University, under the guidance of Frédérique Baumgartner, director of the MA in Art History, and Roberto C. Ferrari, curator of Art Properties.

Clodion (1738-1814) and “Clodion Mania” is the third iteration of an initiative launched in 2017, entitled “MA in Art History Presents,” that offers candidates in the MA in Art History an opportunity to conceive and implement an exhibition based on the Columbia University art collection. Comprised of more than 13,000 works of art in all media, across multiple time periods and cultures worldwide, the collection is stewarded by Art Properties, based in Avery Architectural & Fine Arts Library. Drawing on the pedagogical potential of this extensive collection, as well as on the experience of museum and art professionals based in New York and elsewhere, “MA in Art History Presents” allows students to engage with every aspect of the making of an exhibition, from researching and selecting objects to displaying and interpreting them for an audience. In doing so, it contributes to the knowledge and visibility of Columbia’s art collection.

Clodion (1738-1814) and “Clodion Mania” focuses on two terracotta statuettes that entered the Columbia collection in 1976 as works by the much-celebrated eighteenth-century French sculptor Claude Michel, called Clodion. The exhibition offers a fresh look at the two sculptures, known as Satyr and Two Nymphs and Nymph and Two Satyrs, in light of the production of spectacular Clodion forgeries in the late nineteenth century, to respond to collectors’ growing demand for the Bacchic terracotta groups that Clodion had created in the 1790s.

The curators of Clodion (1738-1814) and “Clodion Mania” wish to thank all the people at Columbia University and beyond who have shared their expertise and lent their assistance with the conception and realization of this exhibition, including: Morgan Adams, Alexis Hagadorn, and the conservation staff at the Columbia University Libraries Conservation Program; Teresa Harris at Avery Architectural & Fine Arts Library; Tim Trombley and Stefaan van Liefferinge at the Media Center for Art History, Columbia University; the staff at the Preservation & Digital Conversion Division, Columbia University Libraries; Zoe Crossland at the Department of Anthropology, Columbia University; Clara Chung, Mika Tal, and Norman Weiss at the Graduate School of Architecture, Planning & Preservation, Columbia University; Dwight Primiano at Dwight Primiano Photography; Batyah Shtrum at SBE Conservation LLC; Jack Soultanian at the Metropolitan Museum of Art; Michele Marincola at the Institute of Fine Arts; Rika Burnham and Ian Wardropper at the Frick Collection; Wendy Ikemoto at the New-York Historical Society Museum & Library; Guilhem Scherf at the Musée du Louvre; colleagues at Waddesdon Manor; and especially Anne Poulet, Director Emerita of the Frick Collection.