In 1976, Columbia University received a gift from Irma H. (Asiel) Bloomingdale (1888-1989) of two terracotta sculptures: Satyr and Two Nymphs and Nymph and Two Satyrs. Conceived as a pair, the complex compositions, imposing in size for works created in clay, portray the companions of the Roman god Bacchus in the midst of a spirited dance. The statuettes are signed and dated by the much-celebrated eighteenth-century French sculptor Claude-Michel Adam, called Clodion, whose art is associated with the rococo and neoclassical styles. 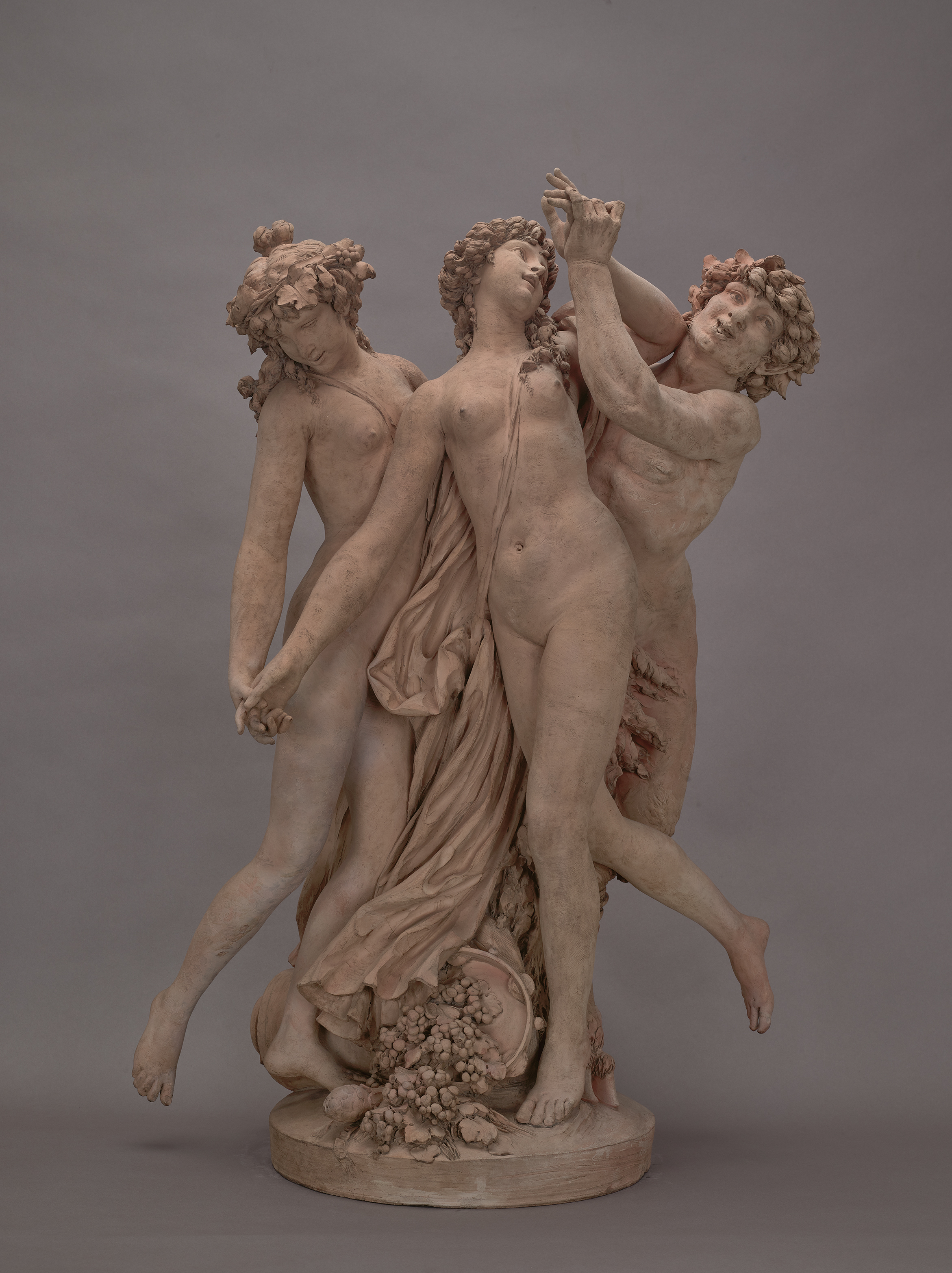 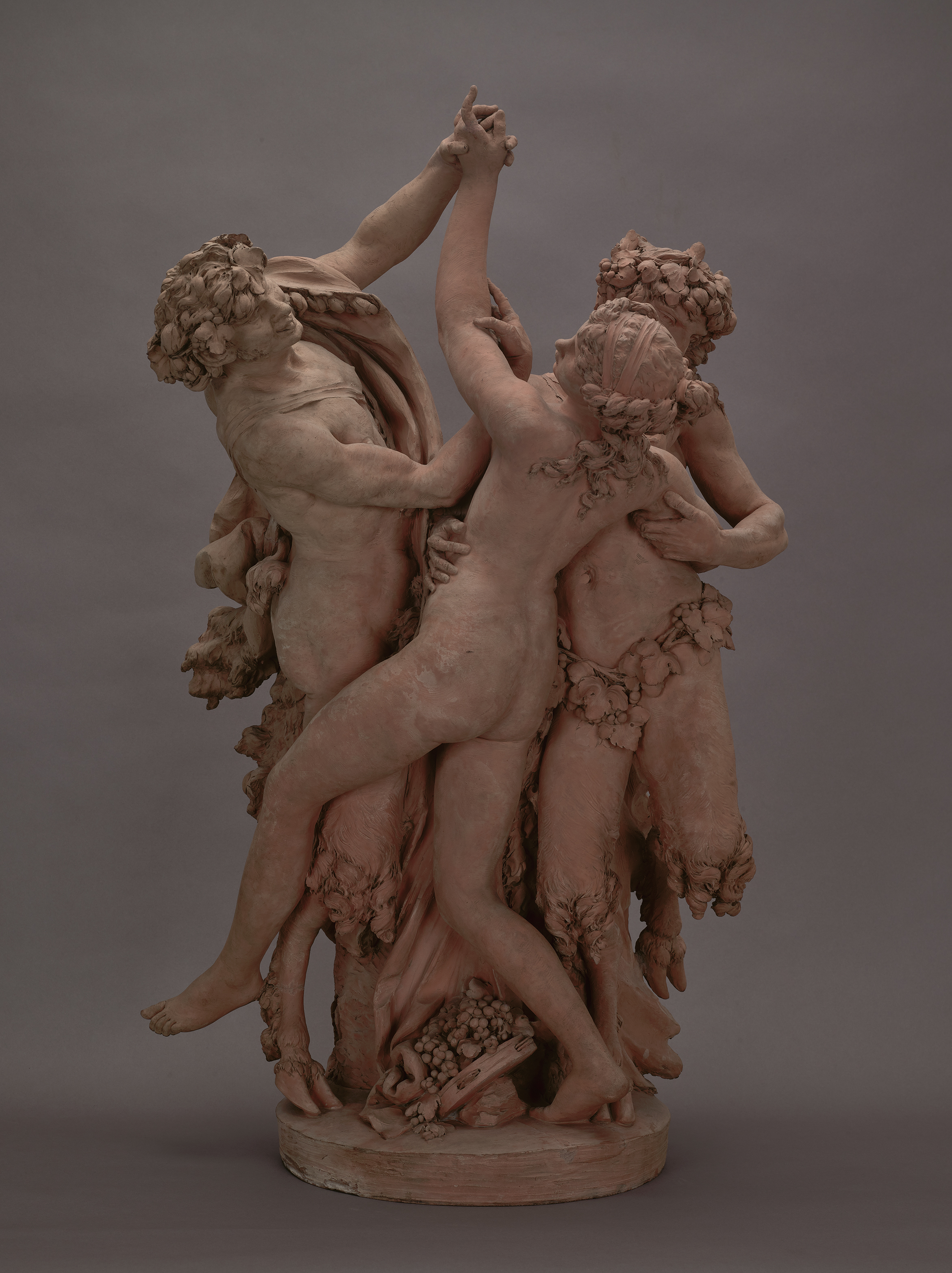 But could the Columbia sculptures be forgeries? The dates of 1778 and 1779 incised next to the artist’s signature are suspect, as this was a decade during which Clodion is not known to have produced or signed Bacchic groups. This exhibition reconsiders the two statuettes in the Columbia collection in light of Clodion’s terracotta production. 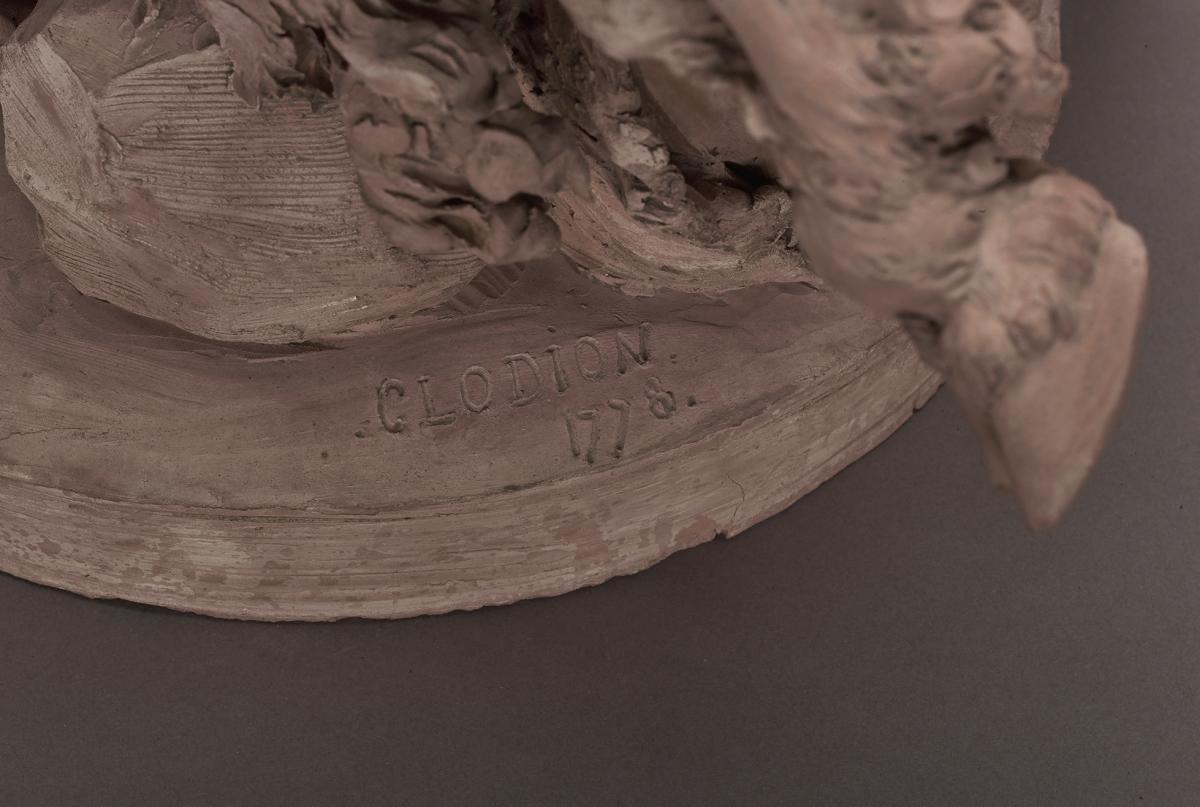 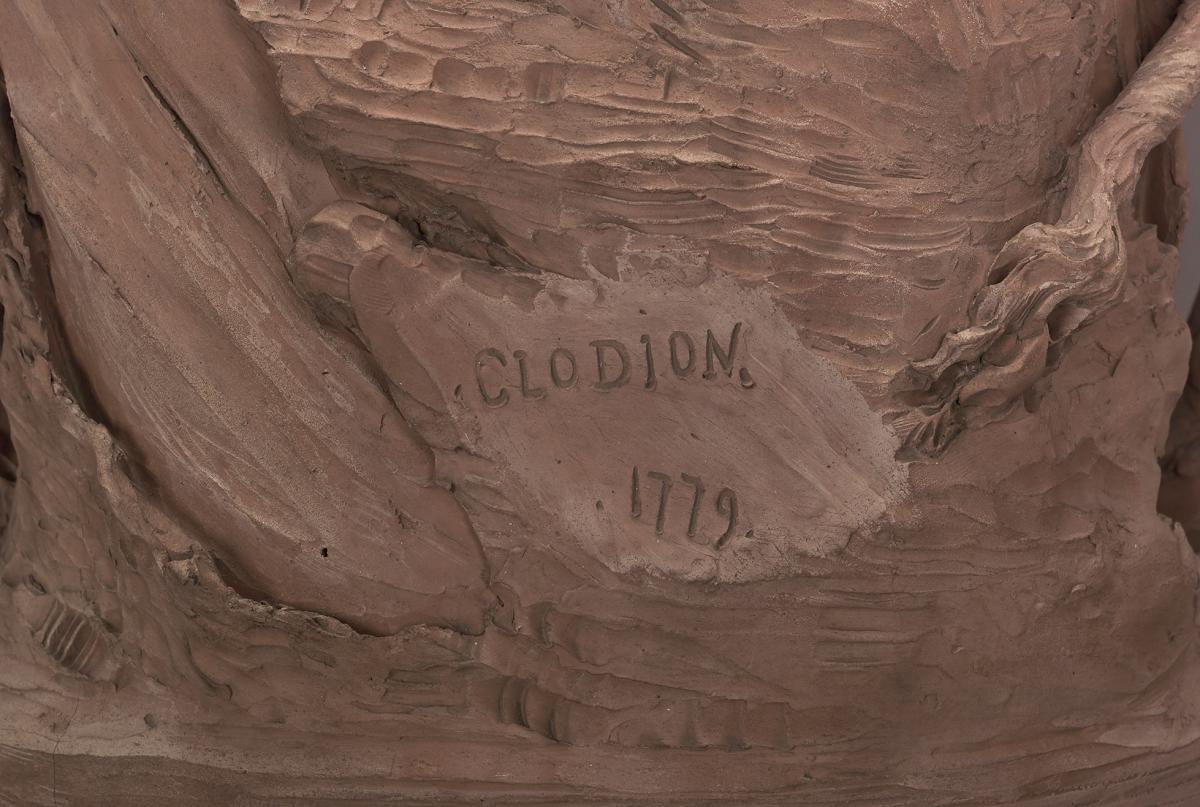 Born in Nancy to a family of sculptors, Clodion moved to Paris around 1755 to train with his uncle Lambert-Sigisbert Adam (1700-1759). A recipient of the prestigious Prix de Rome in 1759, Clodion spent several years in Italy, absorbing its rich artistic heritage and perfecting his knowledge of antiquity. It is also during this period that Clodion developed a preference for working in clay, a medium no longer reserved just for sketching. By the time Clodion returned to Paris in 1777, his reputation was well established and he received several commissions for large marble statues. However, it is with his terracottas depicting light-hearted subjects drawn from antiquity, designed for the refined interiors of wealthy collectors, that he became one the most sought-after sculptors of his generation.

While Satyr and Two Nymphs and Nymph and Two Satyrs, as examples of multi-figure Bacchic terracottas in-the-round, correspond to Clodion’s Parisian production from the 1790s, this type of object also regained tremendous popularity in the 1870s-1880s as part of the rococo revival. Soon, collectors’ growing demand for them led to the creation of spectacular forgeries by artists who embraced the aesthetic challenge that came with recreating Clodion’s art, thus supplying what curator Guilhem Scherf has called “Clodion mania.” Drawing on the expertise of Clodion specialists, including Scherf and Anne Poulet, this exhibition examines how the Columbia sculptures conform to the Bacchic iconography associated with the artist, but argues for their deattribution to Clodion and redating to the nineteenth century, thus highlighting a fascinating chapter in the history of sculpture and its collecting practices over time.

A driving force behind Clodion’s success as an artist was his exceptionally graceful renderings of Bacchanalia in terracotta. These festivities, honoring Bacchus, the Roman god of wine, the grape harvest, and fertility, involved dance, music, and the pursuit of sensual pleasures. Satyr and Two Nymphs, along with its “reversed” pendant, Nymph and Two Satyrs, both draw on Bacchic iconography.

Satyr and Two Nymphs, which received conservation treatment for this exhibition, captures the three figures mid-dance, hands intertwined, each with a foot – or hoof – rising above the ground. Flowing draperies brush against their nude bodies, while the distinct orientation of their gazes adds dynamism to the composition. In addition to hooves, the satyr is portrayed with goat legs and pointed ears, but without the vine leaf belt and lion skin that characterize his counterparts. In the lower part of the composition, a classical-style tympanum serves as a receptacle for the grapes that are cascading over the sculpture’s base, further adorned with a jar spilling wine.

This abundance of details, viewable in the 3D-photographic renderings, is common in Bacchic groups firmly attributed to Clodion, such as Satyr Lifting a Tambourine-Playing Bacchante from 1798. In fact, the satyrs in the Columbia and Philadelphia sculptures all reflect a solid knowledge of the iconography of the satyr. The latter is detailed in the plate from Bernard de Montfaucon’s 1719 volume on antiquity on view, itself a key example of the eighteenth-century antiquarian production that sought to offer rigorous descriptions of ancient iconography. 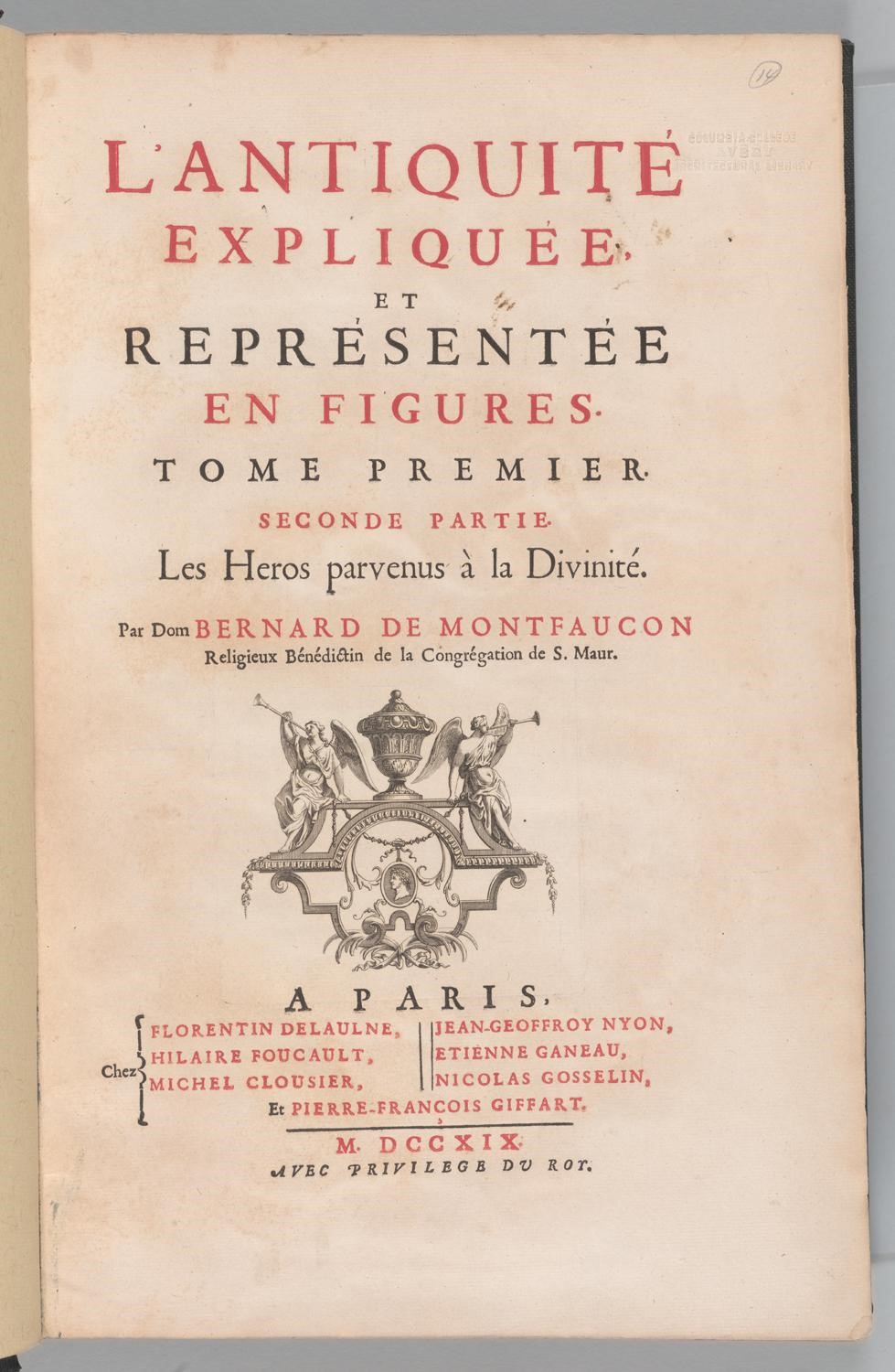 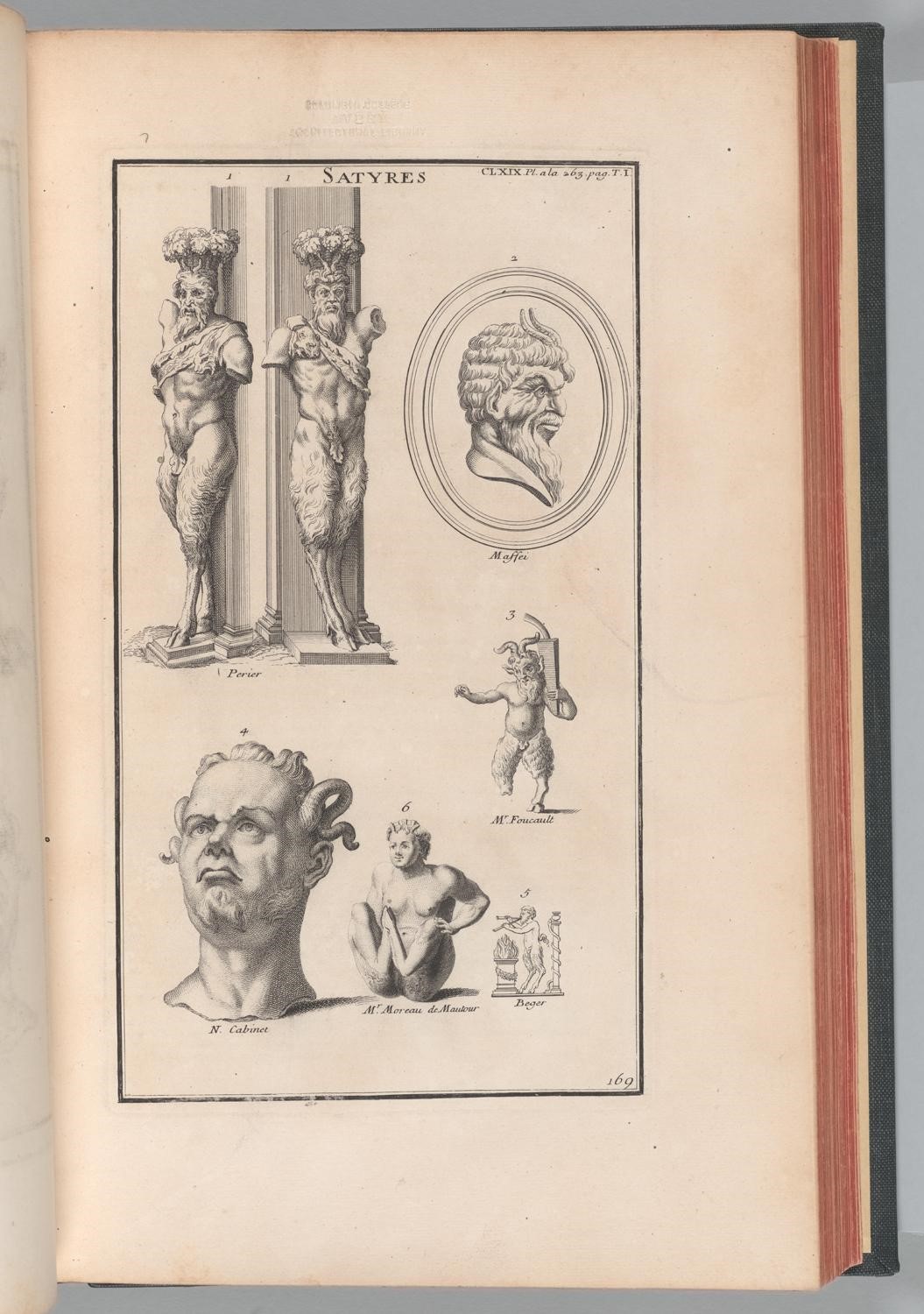 Clodion was first introduced to ancient iconography while training in Paris, through both the art itself and illustrated books on the subject. Publications such as Bernard de Montfaucon’s L’Antiquité expliquée et représentée en figures from 1719 (Antiquity Explained, and Represented in Sculptures) would have been available to him during his years at the École royale des élèves protégés, where the recipients of the Prix de Rome were trained prior to their departure for Italy. The plate on view, titled “Satyres,” features on the top left the two statues known as the Della Valle Satyrs, recognizable by their goat legs and lion skins, among other attributes. The caption “Perier [sic]” refers to Montfaucon’s visual source for this engraving, that is, an etching of the famous pair by the seventeenth-century French draughtsman François Perrier, known for his own volumes of prints after antique sculptures, which Clodion may have also consulted. Clodion would soon be able to see the Della Valle Satyrs in person in Rome’s Capitoline Museum, which must have further stimulated his taste for Bacchic iconography.

Satyr and Two Nymphs and Satyr Lifting a Tambourine-Playing Bacchante are also similar in spirit: both depict playful scenes, combined with a subtle eroticism. While the orange color of the wash on Satyr and Two Nymphs departs from the light brown color standard for Clodion’s terracottas, which also tend to be smaller in size than the Columbia pair, Satyr and Two Nymphs reflects his idiosyncratic interpretation of Bacchanalia.

In the Manner of Clodion

The gouaches and terracottas of the eighteenth century … are so pleasant to the eye, … so titillating for those of delicate taste! Is it not a hint of painting, the modeling of dreams, an almost immaterial beauty?
– Edmond de Goncourt, La Maison d’un artiste, 1881

These words of Edmond de Goncourt (1822-1896), who with his brother Jules (1830-1870) helped rehabilitate the rococo style, speak to collectors’ infatuation with terracottas in the late nineteenth century. The Goncourts collected Clodion, or what were perhaps works in his manner, considering the proliferation of forgeries at the time. So did the famous collector George Blumenthal (1858-1941), who in 1909 gave Mr. and Mrs. Bloomingdale the two sculptures on view as a wedding gift, having reportedly purchased them in Paris.

Goncourt’s remark on “the modeling of dreams” is significant, for Clodion’s art reveals a mastery of clay, characterized by a high degree of finish that endows his statuettes with utmost delicacy. Nevertheless, the Columbia pair, notwithstanding its technical bravura, does not display the level of refinement one sees in Clodion’s work. For example, the grapes are not as expertly modeled as in Bacchante Supported by Bacchus and a Faun, undoubtedly created by Clodion in 1795, while the areas where the satyrs’ fingers apply pressure on the body of the nymph in Nymph and Two Satyrs are modeled in a repetitive manner that looks mechanical. Moreover, the compositions, crowded by massive tree trunks, contradict the lightness that Clodion succeeded in preserving even in multi-figure groups, such as the one in the Norton Simon Museum.

The spirit of Nymph and Two Satyrs casts further doubt on the authorship of the Columbia pair. While the Bacchanalia certainly offered Clodion an opportunity to depict sexually-charged scenes, Nymph and Two Satyrs exceeds the eroticism that pervades the artist’s Bacchic groups. Indeed, this sculpture could be read as a scene of sexual violence: the nymph is shown losing her balance, possibly from her inebriation, but possibly also by the force of her companions, who seem fully in control of the frenzied dance.

Based on these observations, it appears that Clodion is not the author of the Columbia pair. To date, the sculptor who made them remains unidentified. While auction catalogues from the 1790s list groups whose vague descriptions could correspond to the two works on view, the compositions are most likely nineteenth-century inventions, produced to satisfy “Clodion mania.” Their remarkable quality, demonstrating an intimate knowledge of Clodion’s art, managed to deceive many, as exemplified by the book illustration from a late nineteenth-century art history book displayed in this case. 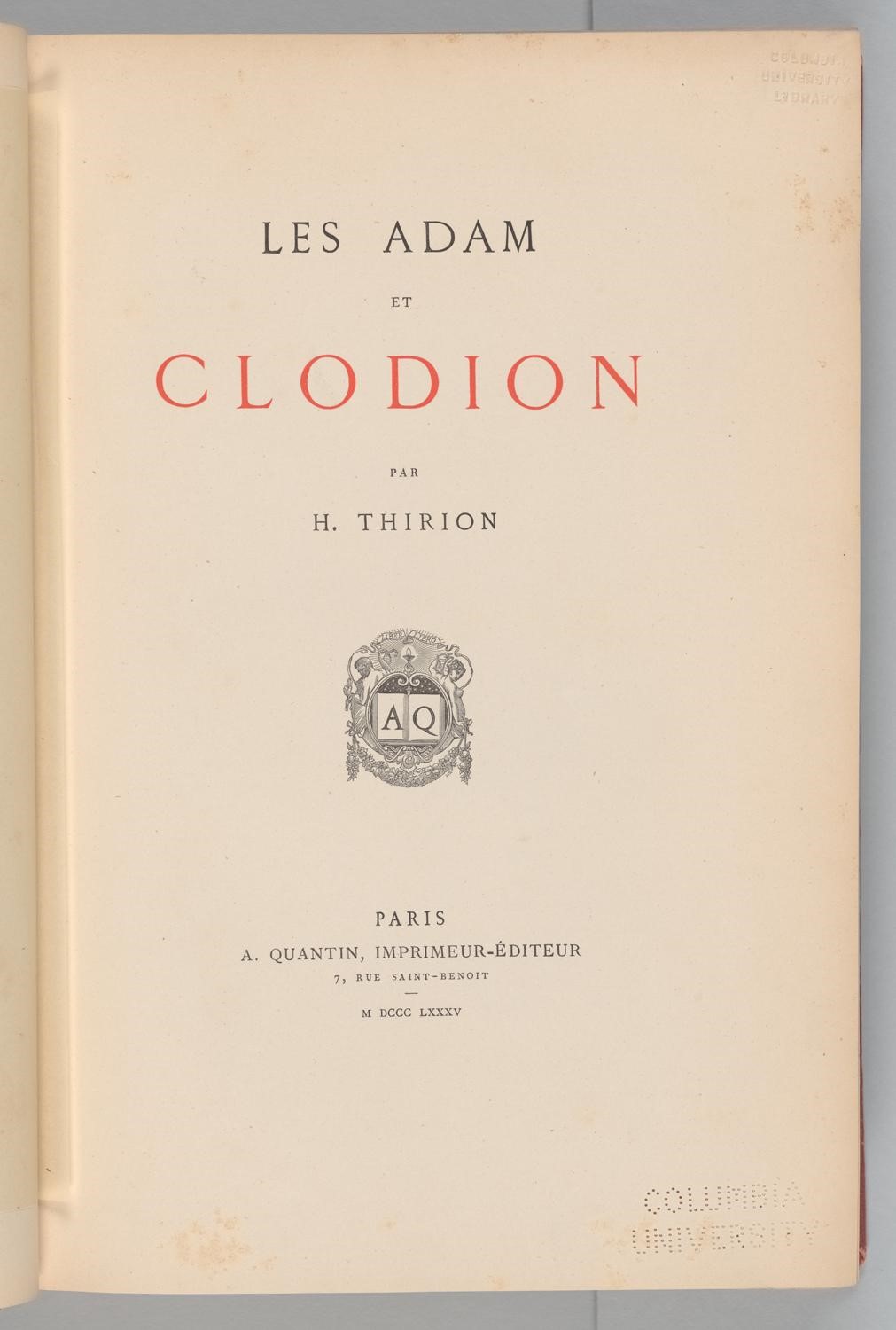 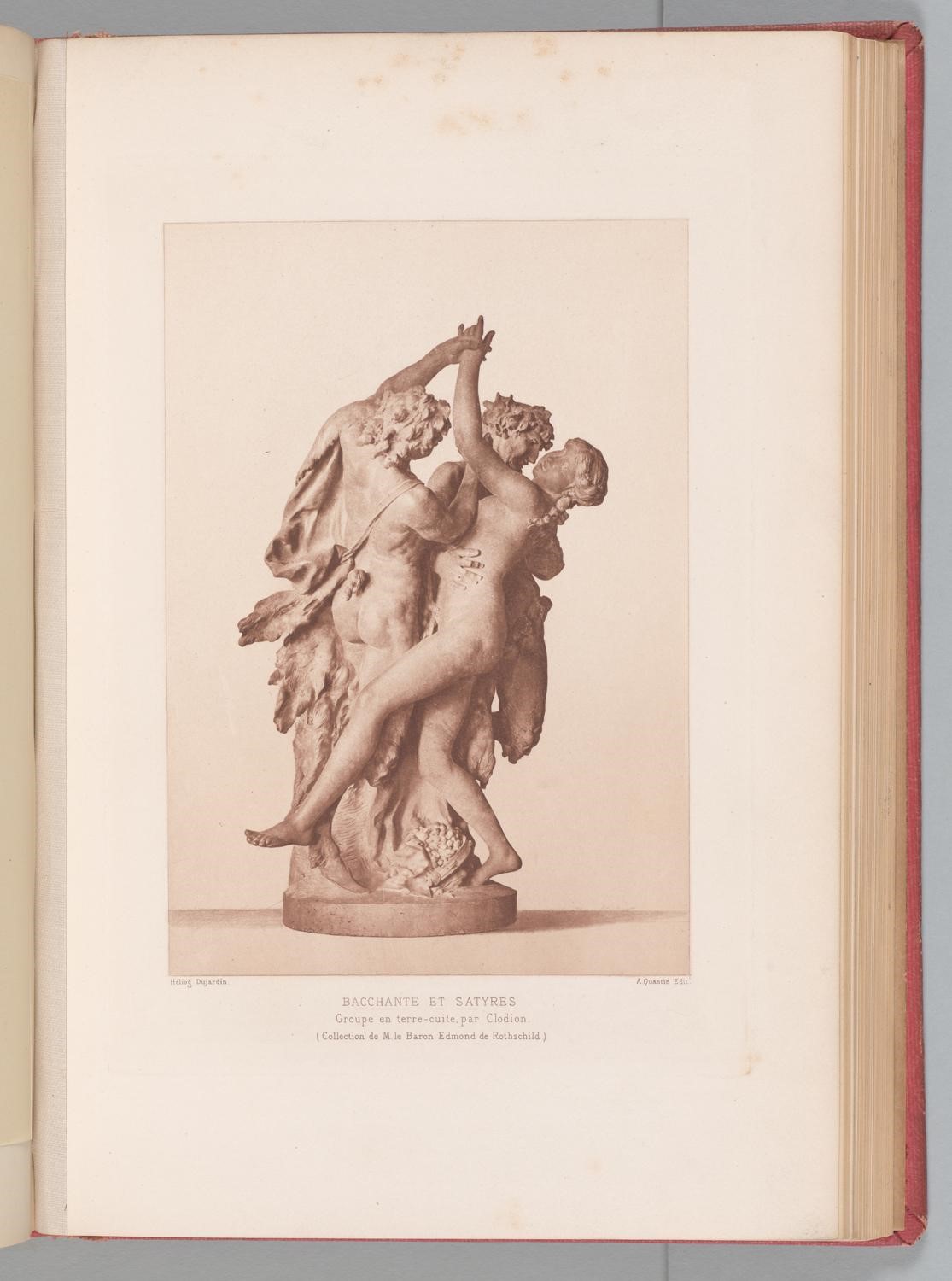 Similar to the Columbia pair, the book entitled Les Adam et Clodion, published by the art historian Henri Thirion in 1885, is a product of “Clodion mania:” it celebrated the art of the sculptor, and made erroneous attributions in the process. The plate on view, reproducing a version of Nymph and Two Satyrs titled here Bacchante et Satyres, is a case in point. Formerly in the collection of Edmond de Rothschild and today at Waddesdon Manor, the plate is captioned, unambiguously, “Groupe en terre-cuite par Clodion” (“Group in terracotta by Clodion”). The 1992 Clodion exhibition that took place at the Musée du Louvre, whose collection includes yet another version of Nymph and Two Satyrs, was a decisive moment in the study of “Clodion mania.” The Columbia pair was not known to the Louvre exhibition curators until the present exhibition was initiated; however, the deattribution proposed here is indebted to their work on the artist’s oeuvre and the oeuvre of others in his manner.